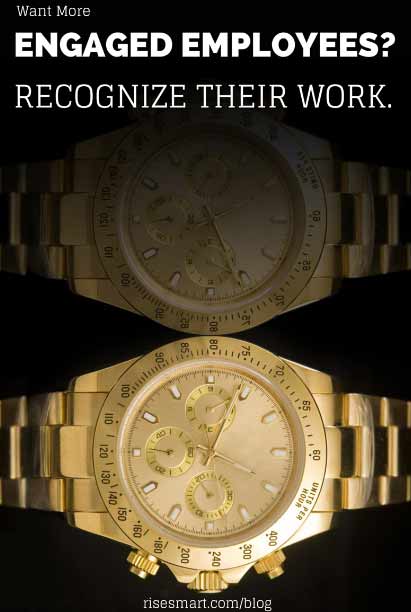 It used to be the ultimate token of a productive career. After decades of work at a single company, employees were handed a gold watch and maybe a plaque to recognize all that they had achieved during their long tenure. Understandably, these nods to a lifetime of hard work were treasured by their recipients – and for some, it was undoubtedly the first and only time their employer had given them a heartfelt “thank you” for all of their efforts.

There is no data on the percentage of retirees who still get a gold watch, but it is safe to assume that the number is small; these days, workers jump between employers far too often for that sort of end-of-career ceremony.

Perhaps we can offer a “good riddance” to that ritual—today’s workplace needs a more effective approach to boost engagement, loyalty and commitment. Savvy employers are already instituting strong employee recognition programs as part of their healthy corporate cultures.

Aristotle once famously said, “We are what we repeatedly do. Excellence, then, is not an act, but a habit.” Smart employers channel a little bit of that Aristotilean wisdom by making an excellent habit of employee recognition.

Recognition does not have to appear as a grand gesture and ceremony—if anything, it should come in the form of constant small touch points. At RiseSmart, for instance, we instituted what is known as the High Five program, which puts recognition into everyone’s hands. The High Five program allows both managers and co-workers to recognize one another whenever they do something that supports or exemplifies one of the company’s core values. Large collections of High Fives are an indication that an employee is performing in an exceptional way, something that can be brought up during performance reviews and other job assessments.

The power of an employee recognition such as this is its simplicity. Empowering employees to participate in the act of recognition on a regular basis makes reinforcing and encouraging the sort of actions an employer wants to see in its workforce easy. That constant reinforcement builds good habits that, taken together, form the bedrock of a culture where employees feel recognized and appreciated. There is a “virtuous circle” aspect to this as well, because those handing out recognition get a boost equally powerful as those who receive it—just as those who give a birthday present are often happier than those who receive it.

A Recognized Employee Is a Productive Employee

Does it really matter whether or not an employee feels recognized and appreciated? If your goal is to have workers who are engaged and committed to their jobs, it matters. Think about it: engaged employees are the ones who show up early at the office, puzzle through complicated problems and challenges while in the shower or on the drive home, and derive a great deal of personal satisfaction from their jobs. In other words, engaged employees are the ones that every company needs in order to succeed.

There is no doubt that retaining engaged employees requires offering plenty of opportunity for advancement, as well as appropriate compensation and benefits. But make no mistake: an employee recognition program that delivers frequent, sincere, and personal feedback to critical workers plays an essential role in this process. Don’t wait to hand out that gold watch to the employees who deserve recognition, encouragement, and positive feedback—by then, it will be too late.