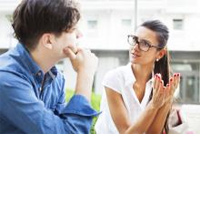 Does using the word “so” at the beginning of a sentence reflect negatively on a speaker? This simple conjunction has sparked a major debate online lately, and it also raises a bigger question that directly relates to the job search. You will be talking to a lot of different people throughout your career or during a career transition. Is what you say undermined by how you say it?

The Trouble with “So”

The discussion of “so” started with an article on the Fast Company website. The author there argued that starting a sentence with “so” does three things:

According to Business Insider, however, that’s all wrong. Starting a sentence with “so” is actually very natural and a common practice in some industries. All the “so” does is mark the beginning of discussion on a topic of interest by one of the people in the conversation. Still, it may be best with “so” to follow the rule of “when in doubt, leave it out.”

Casual Language in the Workplace

A recent article in Elle magazine highlighted the problem of casual language in the workplace, focusing on what it called “girlspeak.” That’s repeating phrases like “I can’t,” “I mean,” and “literally.” It’s also using upspeak, or ending your declarative sentence with a rising tone.

This kind of talk undermines not only what’s being said in the moment, but it may color a superior or hiring manager’s overall opinion of you. Kathleen Warner, the founding Chief Operating Officer of the Startup America Partnership, said as much to Elle:

Be an Active Listener

Again, the article focuses on women in the workplace, but this problem cuts across all lines. Even if you may have been too casual at work, during an interview, or at a networking event, your speech is not a hard problem to correct. The first step is understanding how others expect you to speak—and that understanding comes from simply being an active listener.

Listen to what the other person is saying and how they are saying it. Observe that person’s body language. Follow that person’s lead. Don’t be a mirror and copy the other person’s every move; use their tone and language as a guide for your own. That keeps you from assuming that there is a level of comfort that may not actually be there.

Once you’ve started actively listening, then you must put what you’ve learned into action by actively listening to yourself. Try to catch yourself when you insert a “like” into a sentence that doesn’t require a simile or end a declarative sentence with a question mark. At first, this will feel unnatural, and you will become highly self-aware. Keep in mind, however, that the level of self-awareness will dissipate as you become more comfortable with trusting yourself to speak in a more professional tone and voice.

Don’t become so worried about using the wrong word that you can’t speak without sounding stilted, jumbled, or unnatural; if you find that inserting a “so” into the beginning of your sentences isn’t hurting your professional prospects, but avoiding it is causing you to get tongue tied in important situations, then keep the conjunction and move on.

Your most important charge in the job hunt or throughout your career is to find a way to be authentically you while maintaining a level of professionalism that leaves no one questioning the value of your conversation.