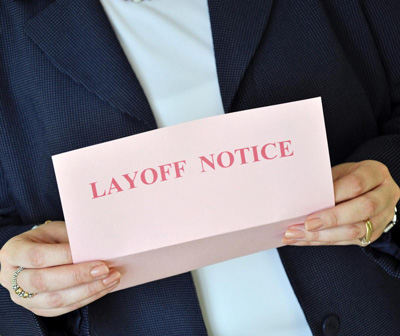 Nobody likes to get laid off. Unfortunately, most of us have, at some point, been on the receiving end of a pink slip. It’s one of the most dreadful feelings in the world, being called into an office unexpectedly, and by the time you walk out, your world has been shattered.

The thoughts that race through your mind—how am I going to tell my significant other? Why is this happening to me? How am I going to pay my bills? What am I going to do next? bring instant stress, pain, and grief. It’s not a feeling you’re likely to forget.In fact, losing a job is ranked just behind death and divorce as the most stressful experiences a person can face.

So when you’re the one on the other side of the desk, delivering the bad news to someone else, knowing exactly what the other person is going through, it’s almost impossible not to empathize. As the person who takes away someone else’s livelihood, regardless of reason, you’re bound to feel profoundly guilty.

Because you’ve been through it yourself, it’s natural to want to offer some sort of consolation, something that’s going to make it better somehow. You want the employee to leave on a positive note, to have some hope, and better yet, some sense of direction. You offer a letter of recommendation, if that’s appropriate. Perhaps you’re in a position to offer severance pay. You mention a company that you heard is hiring.

But is any of that enough?

Initially, outplacement firms filled the hole left in the hearts of hiring managers and HR managers who needed to feel they were offering transitioning employees a consolation prize. The nature of the outplacement was irrelevant—it was not intended to help the employee as much as it was to relieve the guilt of the employer.

Remaining employees could feel better if the laid-off staff were given over to a firm that would, ostensibly, help them find a new job. So, more than 30 years ago, when losing a job was a stigma, a new industry was built, and a new term coined.

Outplacement services provided laid-off employees with the sense of still being in a job—it gave them an office to go to, a phone, and access to mailing equipment. From there, early outplacement firms reasoned, people could conduct a professional job search.

During the late 1980s and 1990s, when several boom and bust cycles happened rapidly, millions of people were laid off from major corporations, and people were exposed, some for the first time, to the concept of outplacement.

Employees reported that outplacement services were providing mass-produced, sub-par quality resumes, bad advice, and counseling that did little or nothing to help them move to the next position. According to a 2009 Wall Street Journal article, executives estimate that about 40% of workers who are offered outplacement services fail to show up. Some choose to ask for cash instead.

How could such a thing have occurred to an industry whose best intentions were to help people find jobs? Enter the Guilt Factor.

Outplacement seemed to be a logical choice—however, it came without quality control, standards, or oversight. Few employers ever checked back with the outplacement firms to see whether they were even helpful. Yet, in the age of frequent corporate layoffs, outplacement grew to a $3 billion industry.

The Great Recession has forced companies to look at outplacement again. Since many managers had experienced layoffs, and even outplacement services, before, their guilt was no longer assuaged by a nameless, faceless (and mostly useless) outplacement firm.

So outplacement solutions are increasingly expected to rise to the occasion—and to modern technology.

[Tomorrow: What to look for in an outplacement solution.]