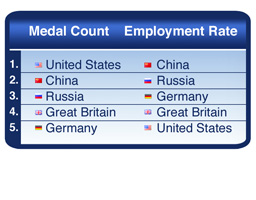 The London 2012 Olympic Games are history, and the United States team led the way in medals with 104, besting its rivals from China, which had 87, Russia (with 82), Great Britain (65), and Germany (44). We think it's time for America to take the baton and surpass its rivals in an even more important measure of success: unemployment rates.

Our analysis of unemployment data for the top five medal winners shows that the U.S. lags behind each of its chief athletic competitors. The U.S. unemployment rate of 8.3 percent is higher than those of China (4.1%), Russia (5.4%), Germany (6.8%), and Great Britain (8.1%), according to data compiled by Trading Economics.

"Placing first in the Olympic medal count is great for our country's morale, but we shouldn't let our competitive spirit end with the games.  Let's extend our desire to be No. 1 in the world to the issue of unemployment," said Sanjay Sathe, RiseSmart's founder and CEO. "America has long led the world in developing and adopting new technologies.  It's time to leverage this advantage to reduce inefficiencies in the job market.

"Even with jobless rates at historic highs, for example, millions of jobs remain open at any given time nationwide – often simply because qualified candidates aren't being quickly and efficiently matched with openings," Sathe said.  "Job-matching software, semantic search technology, social recruitment and other advances can help put Americans back to work faster.  With a focused commitment from both the public and private sectors, we can get back on top in the international competition that matters the most – the global economic race."