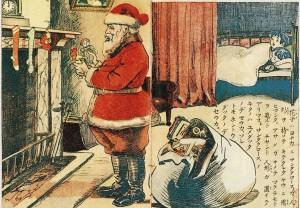 "Dear Santa: Never mind the dolls, I want my job back!"

Shopping online at work may have become standard operating procedure in some offices, but employers are finally cracking down, with stricter policies on Internet usage and in some cases, even total shutdown.

Clearly, companies no longer see online shopping as the occasional indulgence, or a small nuisance:

CIOs whose companies allow access to online shopping sites were also asked, "How many hours per week do you think the average employees in your organization spends shopping online during the holiday season?" The mean response was three hours. "Many companies monitor computer use, and excessive shopping is a red flag that could put someone's job at risk," said John Reed, executive director of Robert Half Technology. "Even if employers allow online shopping, employees should use good judgment and not abuse the privilege."

The new study has generated a lot of headlines branding such companies Scrooges and even Big Brothers, but the larger picture being missed is that with more than half of U.S. workers estimated to be shopping online at work, the phenomenon is causing employers more problems than ever, as Emilie Bransstetter writes at Tech.Blorge:

Seasonal shopping is a common problem with most businesses, but with hacking and phishing technology advancing at such a huge rate, there is more at stake than just a few minutes off the time clock being wasted.With a growing number of holiday shoppers making purchases online, so too has the number of people doing their shopping on their office computer…Losing productivity levels from workers who shop online is bad enough, but with the growing amount of online retailers there is also a growing amount of hackers willing to create fraudulent websites. With current technology they not only go after credit card and social security numbers of their victims, but can and will implant malicious code into the site that can compromise data on the computer the site was accessed from.

And yet, Internet technology is used so regularly in the workplace now that in many ways employees no longer seem to distinguish usage in the office from usage at home. A survey by ISACA in October revealed that more than half of workers interviewed said they click on links emailed to them at work, 28 percent provide their work email address to shopping sites, and 19 percent click shopping links on social networking sites like Facebook while at the office—all considered risky behavior by IT workers in charge of protecting their companies' computer systems.

Considering those risks, perhaps it’s more surprising that some companies do allow unrestricted shopping in the workplace. Localtechwire found one, but, sure enough, it was a company that runs an online shopping site:

Scot Wingo, chief executive officer at ChannelAdvisor, founded and now runs one of the world’s largest providers of ecommerce services for retailers such as eBay, shopping.com and Amazon.com. So one would expect his company to have a liberal “shop at work” online policy. The Morrisville company does – but it’s in the minority,…“We don’t police it,” Wingo said when asked about his corporate policy. “We trust that our employees work hard and it’s never been an issue. In fact, we get a lot of coupons from customers through out the holiday season that are often passed around the office.”