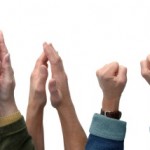 We thought it was pretty cool when we discovered a correlation between jobless rates and Super Bowl winners. So did television and newspaper journalists all over the country.

But not all sports-themed press releases are created equal. Challenger, Gray and Christmas distributed a release last week claiming that America's workforce is crippling corporate productivity by watching March Madness games when they should have their noses to the grindstone.

The firm estimates that American employees will watch the tournament online for at least 8.4 million hours, which equals more than $192 million in wages. Last year, the firm told the world the number was $1.8 billion, by the way, which goes to show you how unscientific this number is ...

The horrible assumption that the firm makes is that it assumes that every minute we are "working," we are productive, which of course is not true. Every day is filled with moments that we are doing something that our employers technically might not be paying us for. How much time do we "waste" going to lunch? How much time do we "waste" checking our personal e-mail? Is there anyone in the world who can’t watch the games and work at the same time?

Maybe the folks at Challenger, Gray and Christmas should stop wasting their time coming out with this report every year. It’s more of a waste of time than any tournament watching.

In other words: air ball.