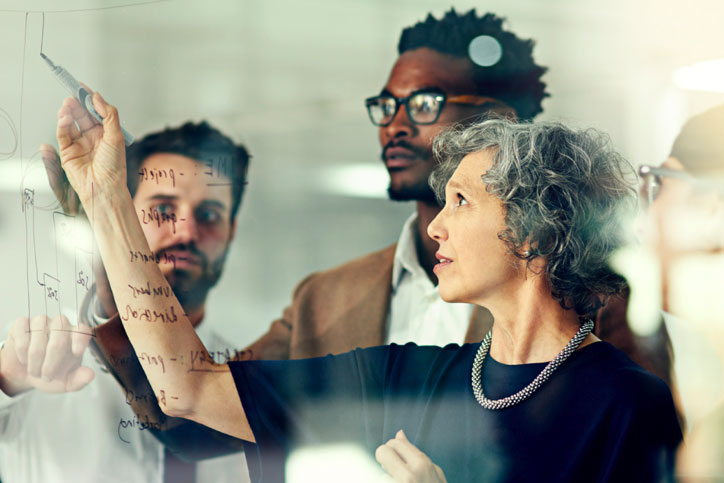 The wave of retiring baby boomers is often called the “silver tsunami.” Blanket characterizations of hair color aside, this group of highly experienced employees—who are among the most well-educated generation—actually represent a golden opportunity for organizations with the wisdom and internal structures in place to take advantage of their rich repository of experience. Companies that wish to retain competitive advantage and address talent scarcity can benefit from the soft skills, business acumen, tribal knowledge, and networks of mature workers.

“Often it is not the explicit knowledge that is most highly sought after, but the tacit knowledge,” says Alison Hernandez, National Director, RiseSmart, Australia and Southeast Asia. “The lessons learned, the go-to people in their internal and external networks, the project post mortems. There is gold in identifying what knowledge is powerful and how it can be successfully shared with future generations in the workforce.”

A newly released white paper from RiseSmart, Mature Workers: A Golden Opportunity in an Age of Talent Scarcity, uses data from multiple sources and a survey of over 100 HR professionals, to make the economic case for retaining and hiring mature employees. It also addresses the myths that surround mature workers, identifies the strategic considerations and practical steps that employers can take to promote an age-diverse, inclusive workforce, and offers case studies.

Research from Aberdeen shows the cost of attracting top talent today is outpacing the return on investment of these new hires in terms of tenure by a factor of up to 2 to 1. And, according to Gallup, nearly half of millennial workers plan to be at their same job in a year, compared with 60 percent of non-millennials. The same report estimates that millennial turnover costs the U.S. economy $30.5 billion annually. Older workers tend to be more loyal, as well as flexible, with their work, and are less likely to leave an organization that treats them fairly. Studies by the Australian government found that individuals over age 45 tend to stay with an employer 2.4 times as long as younger employees who are more focused on career advancement.

Even though millennials will soon be a larger proportion of the population than baby boomers, the latter currently outspend their younger counterparts. In 2015, boomers accounted for nearly half of the GDP in the U.S. By 2025, according to Visa, consumers over age 60 will account for one-third of aggregate spending in the U.S. The PwC Golden Age index estimates that raising the employment rate worldwide for individuals age 55 and over could lead to a long-term GDP gain of $3.5 trillion. Countries, including New Zealand, Iceland and Sweden, already employ more than 75 percent of people over age 55.

With greater numbers of mature workers staying in or returning to the workforce for financial reasons or a desire to continue working, the economic impact of this age group cannot be underestimated. Longer lifespans and falling birthrates, particularly in many developed countries, will lead to greater numbers of mature workers remaining in the workforce. Josh Bersin estimates that by the year 2050, over one-fifth of the workforce will be age 55 and older.

THE WHITE ELEPHANT IN THE ROOM: AGE BIAS

Ageism certainly isn’t a new phenomenon. People may have unconscious bias or be fully aware of it. Workplace stereotyping and discrimination may be subtle or blatant. But in an age where data and science have dispelled many of the myths surrounding age, it shouldn’t be as prevalent as it is. A 72-year-old former employee of a well-known tech company recently sued the company for age-based discrimination and harassment, and this is after the company settled a class-action lawsuit in mid-2019 in which it paid out $11 million to more than 200 plaintiffs age 40 and older who claimed the company engaged in discriminatory employment practices based on age.

While the white paper discusses in greater detail the data that refutes myths around productivity, trainability, loyalty, engagement, flexibility, and absenteeism, it’s safe to say the bias that still exists will require companies to actively promote an inclusive, multi-generational workplace culture, especially in light of the fact that people are living longer and working well beyond “retirement age.”

Related content: Navigating Generations in the Workplace – How to Avoid Ageism and Bias

In the RiseSmart survey of more than 100 HR professionals, we found that companies place a high value on soft skills and many are engaged in career development programs and opportunities for mature workers, including leadership and team lead roles, mentorships, trainers, advisory board positions, and engagement initiatives. The survey also revealed that while progress is being made, there is still substantial room for improvement. On a sliding scale of zero to 100 percent, over one-quarter of respondents believe their company’s utilization of mature employees was less than 50 percent. About half of respondents felt their utilization was between 51 and 80 percent.

“Instead of moving people in and out of an organization, the organization is continually looking at finding the right place for its employees based on skill and role relevance,” says Penelope Brackett, Practice Development Manager, RiseSmart.

Mature workers might be full-time or flex workers, able to work variable hours depending upon the demands of the business. They might be contract or gig workers, individuals who provide specific project expertise, or who are more broadly deployed as mentors to younger employees. In some companies, cross-generational training may take the form of a a younger employee helping an older employee with digital skills, while the mature employee helps the younger worker learn how to best navigate through the organization to advance his or her career.

“It’s really about having a culture of career mobility and helping employees plan their paths as they reimagine their lives and careers,” Penelope says. “Mature careers span the gamut, including senior leadership, part-time or consulting roles, entrepreneurship, volunteering, or full retirement. Leading companies are helping their employees transition into this new phase years in advance, assisting them in transforming their roles and maximizing their personal satisfaction and effectiveness, as well as having a positive impact on the organization.”

It’s really about having a culture of career mobility and helping employees plan their paths as they reimagine their lives and careers. @pmbrackett #SmartTalkHR https://bit.ly/2lBegUS

In addition, exiting employees can pass on their knowledge and skills to other employees or become part of an “as-needed” workforce. These organizations, Penelope says, often continue to offer full benefits for employees through this process—whether they are full-time or reducing their hours to part-time while preparing for the transition to retirement—because they “recognize the value of these employees’ skills and experience, knowledge transfer, training, and mentoring, as well as the importance of employer brand.”

As mature employees begin to think about their path to retirement, it’s important to address several factors including the meaning of purposeful work, health and wellness issues, financial resources, relationships, and how to achieve one’s vision for retirement. Mature employees can benefit from both creative retirement seminars that cover these issues and from coaching to help them with finding new roles inside or outside their organization as they transition toward encore careers.

“Leadership, organization, teamwork ,and commitment are among some of the most common soft skills I see in older employees,” says Laura Olert, Executive Career Coach, RiseSmart. “These are extremely marketable skills, especially today, but sometimes mature workers don’t have the confidence they need to sell those skills because they’re worried about their age. Through coaching, we can help them develop and promote their capabilities through stories, and especially through networking.”

Leadership, organization, teamwork and commitment are among some of the most common soft skills I see in older employees. @LauraOlert #SmartTalkHR https://bit.ly/2lBegUS

Laura encourages employees and their managers to begin conversations about role transitions sooner rather than later. Employees, she says, should network within their company to discover where their experiences can be a value-add to the business and how they can position themselves to internal audiences.

These practices from the 2016 Willing to Work report by the Australian Human Rights Commission were adopted by RiseSmart as a guide for organizations to follow when developing mature worker policies and practices.