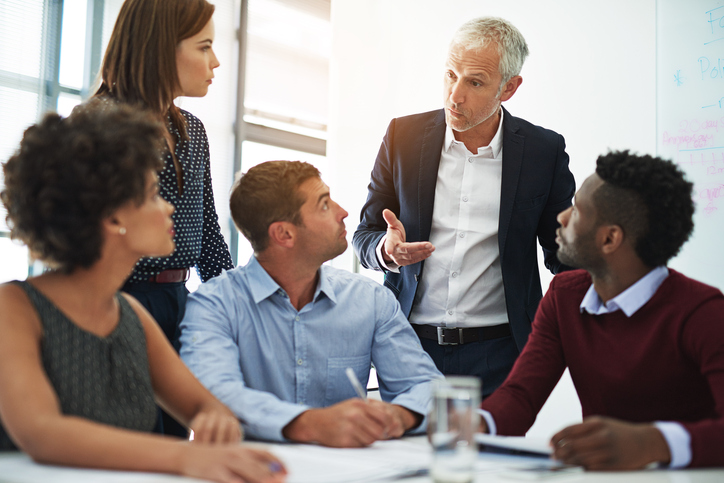 Traditionally, the model for performance management and human capital management has been largely based on individuals. Conversely, research is now showing that those models are falling short. As the time spent in collaboration continues to increase and organizations expand to global entities, creating effective teams has become critical to the overall health of the organization.

Recently, I discussed the importance of effective teams in a webinar, How to Drive Organizational Growth Through Teamwork and Purpose. The following is a recap of some the main points of that webinar. If you want to hear more, you can view the webinar in its entirety here.

“Many of today’s most valuable firms have come to realize that analyzing and improving individual workers - a practice known as ‘employee performance optimization’ - isn’t enough. As commerce becomes increasingly global and complex, the bulk of modern work is more and more team-based,” The New York Times.

Studies are also showing that people working in teams tend to achieve better results and report higher job satisfaction. While we all need time to work solo, so much of what we get meaning from in work is relationships and growth – two things that are hard to do by yourself. It’s critical that we start to think about teams as the fundamental building blocks for an effective organization.

As teamwork becomes the norm for organizations, the conventional wisdom has been that to build a great team all you need to do is to hire the right people. In other words, get the best people, put them together, and watch them accomplish awesome stuff. If you ask most people, “How do you build a great team?” Most people’s answers start with, “Find the right people…”.

But research from Google has proven that having a group of great people is not correlated to the success of a team. The whole idea that a team is as good as its individual members is just not true. Instead, what we’re finding is that the performance of the team is dependent on the dynamics and the norms within the team. The challenge for organizations and managers now is to find the processes and systems to use that will ensure the team you’re building can perform to the full potential of its individual members. But, before we talk about a solution, I want to explore the elements and factors that create either successful or unsuccessful teams.

Successful teams are not a sum of their parts

In the webinar, I tell the story of a volunteer organization I started in 2001 to help non-profits get websites and other services to help them succeed. My services were free and everyone involved in the organization was a volunteer. What surprised me, was that the non-profit organizations we first approached did not want us to help them. At first I was shocked, until I stopped to find out why. What I heard them saying about pro bono work was “It’s the gift that keeps on taking.”

These organizations were very familiar with good intentioned people stepping up to help and then never finishing the job. The organizations themselves put time and resources into projects that were completed less than 50% of the time. It was at that moment when I had to step back from my desire to be a social change advocate and reflect on why a non-profit would be unwilling to accept pro bono services.

The challenge before me wasn’t deciding who to help and which volunteers and services to offer, my challenge was to find a way to solve the problems of motivation that were keeping volunteers from finishing projects so that non-profit would be willing to accept pro bono services again.

Fast forward 12 years later, the Taproot Foundation has helped catalyze a $15 billion a year pro bono service. We were so successful that we had affiliates in every major industrial economy in the world. We had dozens of companies building pro bono programs. and we had the White House supporting our work. At one point, there was four times as much pro bono service being performed as actual cash giving from companies into the nonprofit sector.

Creating effective teams to get the job done

By making sure teams of volunteers could work together to actually finish projects changed pro bono work from the “gift that keeps on taking” to the “gift that keeps on giving.” It took us about five years to figure it out, but the result was a radical shift in how pro bono work was done and how well it was received by the non-profits involved. We increased completion rates from 40-50 percent to over 90 percent.

Here are the challenges we were facing when we started Taproot:

On top of these challenges, the volunteers were people already working 50 hours a week at their paying jobs and many of them also had families with children. Most of our volunteers were not consultants and had never done any kind of consulting work. The projects we were doing were generally 5 months long and required around 5 hours a week. Our challenge was to find a way to keep people engaged over a long period of time, despite the distractions of the rest of their lives.

Below is a traditional team life cycle. Teams typically come together, fight a little bit to figure out who they are, and then decide how they’re going to work together and how they’re going to operate. Moving through the first three stages successfully allows them to perform to their potential.

Because of the nature of the work, we were always forming teams with a group of strangers who couldn’t move from forming to storming. They didn’t know each other, so they were hesitant to fully show up. When they were able to move through storming to norming, there wasn’t enough of a sense of impact and personal need to push through the hard times to actually truly performing. From our experiences and research, we were able to identify two key moments in the life cycle of a project that causes it to derail. 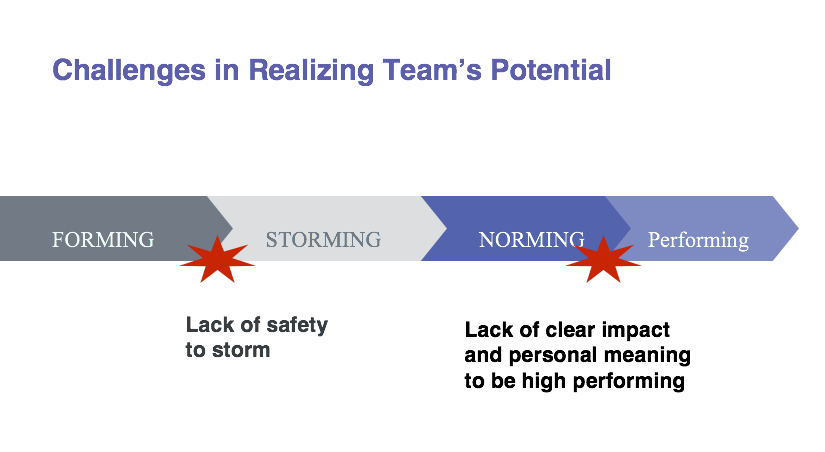 When we first started putting teams together, we assumed that helping a non-profit was fulfilling and motivating enough. Surprisingly, we found that was not nearly enough. People wanted to know a lot more about the project and their role in it, including:

If you apply these motivators to your own organization, you can see why it’s important to understand your innate culture, your desired impact, how you measure success, and why specific projects matter.

After we did a lot of work up front to properly frame the project, make sure the nonprofit involved was truly ready for the project, and ensured that the project could actually make an impact, we found that people were still not willing to fully engage and see the project through to the end.

After the first month or so, people started to withdraw from the projects because they didn’t find the work personally challenging enough and the connections to team members strong enough to motivate them to stick with it. And we faced our next set of challenges:

These are the same questions anyone managing a team needs to ask to ensure that there’s meaning on a team for every person involved. The challenge with meaning is that it requires authenticity.

In our case, we had virtual teams and because everyone wasn’t in the same room and didn’t know the other people on the project, we had to create an artificial storming session. We started out by asking team members to share all the things they thought could go wrong with the project and we had each person share their fears.

In the end, everyone on the team was able to connect to the other team members as real people, with real concerns and fears. Once they made those connections, team members were open to creating a supportive environment for each other. Psychological safety is critical to the effectiveness of teams. When you’re evaluating teams in your organization for levels of psychological safety, ask these critical questions:

About 10 years after the Taproot Foundation had done its research and really figured out what it takes to use intrinsic motivation to get teams to form, storm, norm, and perform, Google studied several hundred teams across its organization and found that there are five variables that make the difference between effective and ineffective teams and three of them are the same as we identified – psychological safety, personal meaning, and impact.

We concluded that it’s not just in pro bono work in a nonprofit setting, but actually, to be a high performing team at a company like Google, those things were radically important. It’s also important to have dependability, structure, and clarity – classic project management components. Without these five things, teams were not successful no matter how good the people were on the team.

The real challenge for organizations looking to build effective teams is to know how to manage these five variables:

Right now, the systems we have for management are designed mostly around number two and number three and there’s very little effort or focus on psychological safety, meaning, and impact.

During the webinar, I discuss the work we’ve done at Taproot Foundation to design and create systems to enable managers inside for-profit organizations to be able to use intrinsic motivation to create truly high performing teams. To learn what we’ve learned in the last 10 years at Taproot, view the webinar in its entirety, here.

Over the course of a dozen years working with Taproot, I decoded patterns of intrinsic motivation. In 2014, I founded Imperative to  bring these purpose insights to the workforce and enable everyone to uncover and apply their purpose drivers to realize their potential as employees and members of society. Today, Imperative has helped over 100,000 professionals awaken purpose in their work and its Purpose Lab has led the largest global research agenda on purpose. Read more about Imperative's Certified Purpose Leader Program here.