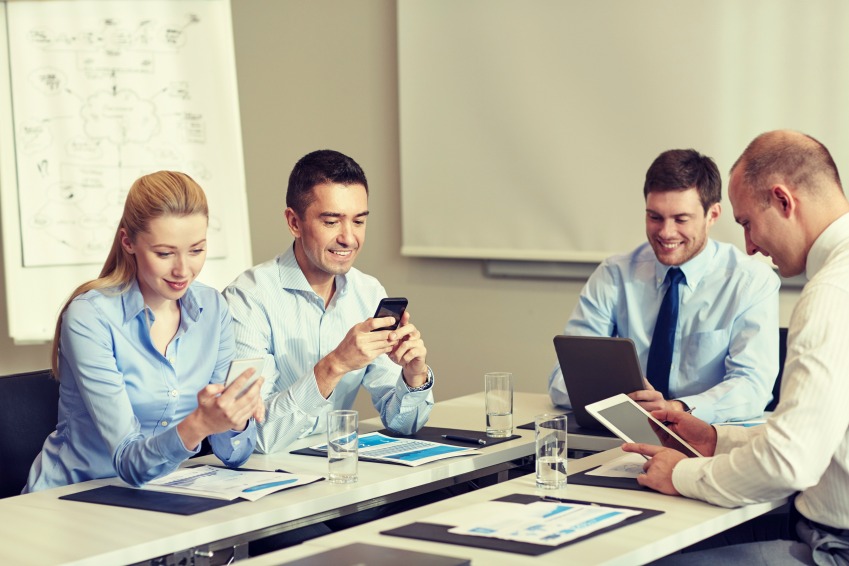 Throughout history, technology has shaped the way we work. While a single blog post cannot cover the entire industrial revolution and the technological advancements leading up to it, we can still take a look at major developments of the past century and how technology is influencing the workplace today.

The Evolution of Computers in the Workplace

Today’s office couldn’t function without the computer, but it wasn’t long ago that the term “computer” meant something else entirely. Before the modern computer became readily available or even practical for the workplace, so called “human computers”—such as Sylvia Miller, who worked at NASA’s Jet Propulsion Laboratory—were hired to perform mathematical calculations. Though Miller was one of the last human computers NASA employed, the world still needs capable mathematicians, engineers, and accountants.

Instead of being replaced by computers (of the mechanical variety) the workforce is made more efficient and more powerful by technology. But with all of this progress, we interact with computers the same way typists used to interact with the typewriter, proving that sometimes the simplest solution is the most effective. That said, technological innovation is vital and the workplace gains increased efficiency with each new advancement. In addition to raw computing power, the computer paved the way for the Internet—one of the greatest innovations and most valuable resources.

Though the benefits of the Internet seem obvious to us today, it required the support of the government to bring to fruition. Despite the flack Al Gore receives for his claim to have “invented the Internet,” he played a central role in promoting legislation that enabled greater public access and the expansion of the Internet. It continues to expand and is more prevalent in the workplace than ever. Just try to imagine what work would be like without email, for example—a tool made possible by the inner workings of the Internet.

Advancements in technology have created a constantly connected workforce, which has its pros and cons. Over the past several decades, as email has become more prominent, it has created a culture where people have fewer face-to-face conversations and are expected to always be on the clock, responding to one another after hours. This mindset is perpetuated by the ubiquity of cell phones, particularly smartphones with access to—you guessed it—never-ending emails.

The office can reach you whenever and wherever—but that may be a good thing. Improvements in technology have opened up the possibility for working remotely, whether that’s working from home, in another city or state so that your spouse can also pursue a thriving career, or from the beaches of Thailand as you travel the world. And we may be coming full circle, emerging from our email culture to embrace new technologies, such as video collaboration, screen sharing, and instant messaging, which allow improved connectivity and communication.

People want to look for a job the same way the want to do their job, on-the-go, and technology is making that possible. Just because someone is going to through a career transition, doesn’t mean they’ve put the rest of their life on hold to find their next job. That’s why we’ve built mobile functionality into RiseSmart Spotlight. Spotlight’s mobile app enables job seekers to search for job openings, message their career coach, and review resources that can help them land their next opportunity—all while carrying on with daily life.

The world, and the workplace, has experienced significant technological progress over the past century, but we’re on the cusp of even greater technological development. While we may not always see the immediate value of some technology or its application in the workplace, if we embrace technological change and approach new ideas with an open mind, the workforce is sure to benefit. To be a truly effective employer is to be a forward-thinking one—which means staying up to date on the way people work (or will be working) and critically assessing how one technological shift can affect the entire employee lifecycle.