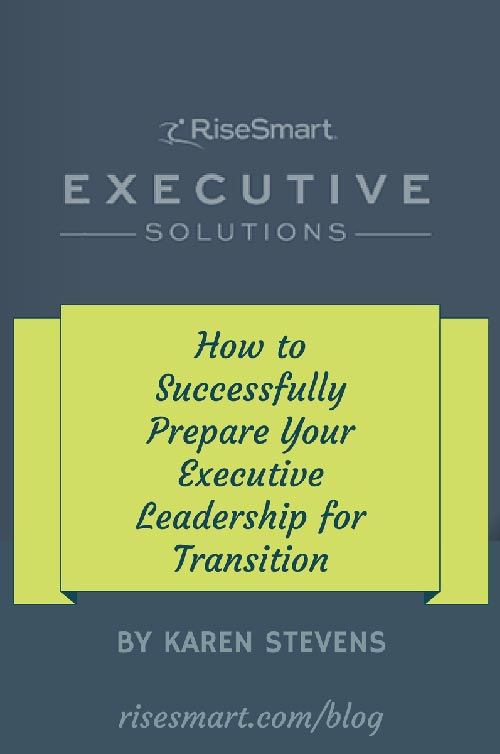 According to a study released by the Conference Board, nearly a quarter of all CEO turnover events occurred due to a dismissal, with the average CEO tenure about 9.7 years, which is up slightly after a decline in average tenure over the last several years.

The outlooks seems positive for transitioning executives in 2014 (certainly not worse than last year, according to one survey), though the majority of executives expect to take between six and twelve months to land a new role. For many executives, that can add up to tens of thousands of dollars in lost salary. For many executives the harder blow is the emotional toll for a leader accustomed to a role with tight deadlines, fast pace, and a team to support their goals, having to adjust to the slower pace of the job search and having little or no support in that endeavor.

A successful transition starts with the quality of the preparation that executives undertake before they launch their search, as well as the quality of the services they receive to help them effectively orchestrate and execute a plan to quickly land a new position.

Executives are professionals who typically have earned their status through hard work and teamwork. They are used to networking and high-level planning while relying on a team for execution and reporting. In my opinion, executive outplacement is most successful when it can establish that familiar role. Having a team to help the executive discover where they want to go next, formulate a plan of attack, and execute on that plan can make all the difference.

While highly skilled in their roles and knowledgeable in their industries, most professionals, especially executives, do not spend a lot of time planning to search for a new role. Because the average tenure of a CEO is 9.7 years (and a majority of senior executives are remaining in their roles between 2-5 years), much of that time may not be dedicated to understanding the nuances of the job search, networking, online reputation management, or, least of all, resume writing. Many may not even know how to leverage social networking in the context of personal branding or landing a new role. Having a team of experts to support the executive is invaluable to the process and we find, on average, that the executives with whom we work land a new job 72 percent faster than the national average.

In addition to having a team, today’s executives are also used to working on the go and connecting to the office via any device at any time. For the outplacement experience to be effective—and bearable—executives should not have to suddenly disrupt their schedules and habits to use someone else’s office on someone else’s hours. Having career transition services available at their fingertips is paramount to being successful in navigating today’s executive job market.

Providing impacted executives a balance of cutting edge technology and an experienced team, including a dedicated executive resume writer, executive coach, and job sourcing/research expert, who are experts in today’s job market and search methodology and are available on the executive’s time, is of the utmost importance in facilitating a speedy transition from one role to the next –whether that new role is in the same line of work or takes the executive down a new career path into another industry, entrepreneurship, or creative retirement.

In keeping with our commitment to transitioning talent and changing lives, RiseSmart has continued to invest in updating and improving our executive outplacement services, and, under RiseSmart’s Executive Solutions, senior-level talent have landed new jobs, on average, in about half the time.

Transitioning your executives should be a win-win proposition for both you and your former leaders. To discover how you can speed the time-to-land for impacted executives, I invite you to join me for a special webinar on Wednesday, September 17 at 10 am PST/1pm EST. You can register here.

Karen Stevens, SPHR, is the Vice President of Practice Strategy for RiseSmart. Connect with her on LinkedIn or Twitter.