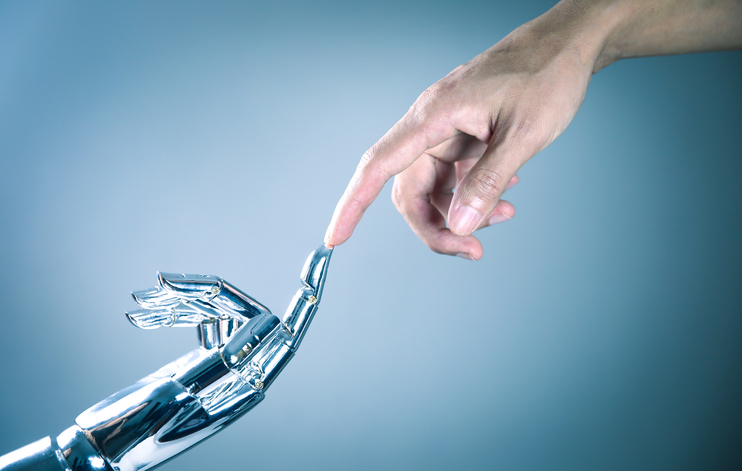 The automation of white collar jobs isn’t as far off as we think. If we consider the history of artificial intelligence and automation, it actually goes back decades. The ATM machine, for example, automated certain banking processes and reduced the number of bank tellers needed. Now, we’re in the thick of the acceleration of the application of AI and its impact. It’s easy to see how technology can take over repetitive processes (like in a manufacturing plant, for example)—but now we’re seeing AI make inroads into white collar work too.

So how did we get here—and how did we arrive so quickly? In the last few years, it seems like everyone has been talking about AI and all its futuristic possibilities. From enabling self-driving cars to finding a cure for cancer, AI has been praised as the missing link to our future progress as a society. In recent years, AI has surpassed some human potential, thus perpetuating the adoption of this technology even further.

For example, AI is now outperforming radiologists in reading diagnostic scans even more consistently and accurately than humans. In addition, AI can now be used to scan medical articles and journals so swiftly that it exceeds the ability of any medical person to keep on top of what’s published each year. AI can quickly sift through huge amounts of data, searching for certain connections, and spot potentially meaningful combinations of new pharmacological diagnoses, drug development possibilities and treatments that humans just don’t have the capacity to see.

AI: How far have we really come?

It almost sounds too good to be true, right? AI has been in the spotlight, but it’s still tough to believe that it could really replace work processes we’ve taken decades to perfect. So far, AI is best applied to any type of automated process that has a myriad of data and patterns, and where it’s literally impossible for people to keep up. So yes, in short, it’s very close (if not already) taking over some forms of white-collar work.

Recently, Amazon admitted it’s already begun replacing white collar workers, in areas such as insurance buying and product buying. It’s important to note that the company’s “hands off the wheel” project, which was designed to enable humans to override automated processes if/when they believed them to be a mistake, started several years ago, according to Bloomberg. There is already a generation of white collar workers who have seen their jobs change drastically, even to the point of elimination, because of the automation technology. In the words of Neil Ackerman, a former Amazon executive, “computers know what to buy and when to buy, when to offer a deal and when not to…. these algorithms take in thousands of inputs and are always running smarter than any human.”

If the idea that a computer might steal your job is leaving you in a panic, you’re not the first to feel this way—and you certainly won’t be the last. Think back to a few decades ago: the development of the Internet was a looming threat to map-makers and encyclopedia salespeople. Computers and automation have been threatening jobs and changing the way we work for decades. It’s the people and businesses who embrace the technology ahead of the curve that continue to thrive, despite immense change.  When the business model is disrupted, such as through AI, there are often unforeseen opportunities.  Those opportunities are just over the horizon.

It’s the people and businesses who embrace the technology ahead of the curve that continue to thrive, despite immense change. via John Taylor @RiseSmart #SmartTalkHR https://bit.ly/2zzqFP8

We recently learned of a situation where an HR department fired someone who shouldn’t have been fired. It came down to an AI-related machine not checking a box. As the terminated employee was escorted out of the building, fellow employees stood there rather stunned, but unable to intercede as humans to help correct the mistake. Is it possible that we’ve already lost our human touch?

There will always remain a place for human beings to step in and make or change decisions. In its current state, AI is really great for repetitive tasks when we’re working with data, and where there is some degree of predictability. But bottom line: AI is currently only as good as how it’s programmed. The situation we’re seeing today with autonomous cars hammers that point home. In response to an unfortunate death of a pedestrian due to poor technology during an automated drive, all driverless car manufacturers are retooling to ensure this never happens again.

Related content: How to prepare for the skills gap impacting your future workforce

As it stands today, AI is simply not good --- yet --- in areas where functions like creative insight, intuition or nuanced thinking are needed. From the fired employee mistake to horrific driverless car accidents, it’s clear human interaction and intervention are still critical factors to the success of many AI applications.

How can we thrive in the AI era of work?

As we move into the future era of work, which will be largely driven by automation and AI, it’s important to do our own “retooling” or “recalibration,” so to speak. Humans must be the ones to consider other relevant information that AI might not be programmed to consider. The decision to fire or promote somebody will not always be cut and dry, and it will be some time before automation catches up on being as creative or insightful as humans.

There are a few things we can do to make sure AI is working for us and not the other way around:

When computers and printer technology first became mainstream, nearly anything that was printed on computer paper was taken as truth. We see something similar happening with AI. Just because a car can drive without a driver, doesn’t mean it’s ready to hit the road. It’s up to us to be optimistic, yet overly cautious in the early stages of AI implication.

AI will not go away – it’s already replacing white collar jobs and this will only continue to accelerate. Think about all the opportunists that succeeded due to the rise of the Internet. The same potential exists given the new AI frontier. If you are a jobseeker or in the midst of a career transition, it might be advantageous to embrace AI and move in its direction.

If you are a jobseeker or in the midst of a career transition, it might be advantageous to embrace AI and move in its direction. via John Taylor @RiseSmart #SmartTalkHR https://bit.ly/2zzqFP8

Educational models may need change from institutions designed to train workers to complete specific tasks or focus on hard skills (such as mathematical computation) to helping people develop their creative thinking skills and the soft skills they’ll need to thrive in the era of AI. Next generation workers will need to understand how to apply their knowledge and skills to processes. Future education may focus more heavily on developing creativity and insight, as workplaces will need these skills as AI will handle administrative, computational, and repetitive tasks.

#4: Don’t sit in a holding pattern

As managers and employees, the worst thing you can do right now is “sit back and wait.” At RiseSmart, we’re working on forward-looking career development program offerings, putting a strong focus on a track designed to help job seekers and employees explore other potential opportunities and functions for their future career. Employees and employers must acknowledge that AI will change what jobs look like in the future. This open dialogue ensures everyone is able to put their best foot forward.

It’s not difficult to imagine how widely and hugely AI and automation will impact the future of work in our society. Fortunately, human touch and AI are best used in tandem. Follow a smart strategy to excel in tomorrow’s business world by looking forward, instead of backwards. Start today.  Think about what the world could—and likely will—look like in five or 10 years, and start planning and taking steps to ensure you are where you want to be in this new era of work.  The future is just around the corner!