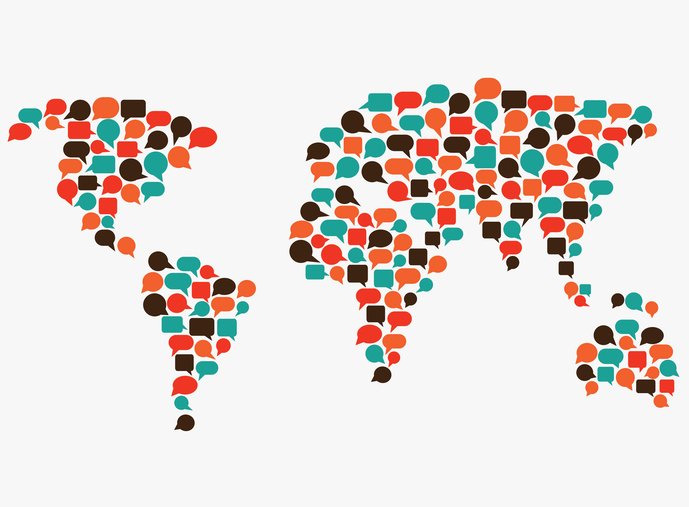 Our world is getting smaller. Advances in technology have led to the ability to communicate and conduct business over great distances without the constraints of time and money. In addition, economic progress, international cooperation, and the ability to transfer currency has made the connections between nations. For HR departments there have been challenges. Inclusionary practices that not only accept but also celebrate differences have grown out of a need to attract and retain the best talent, no matter where that person originated or currently resides. In spite of all the inclusion and diversity initiatives and trainings, the non-native speaker is still at a disadvantage.

I recently presented some of the challenges and prejudices faced by non-native English speakers in international business setting in a RiseSmart #SmartTalkHR webinar. During the presentation, I discussed some of the finding in Leading in English, a book I authored with Joerg Schmitz and Stephan M. Mradyks. You can view the webinar in its entirety here.

For HR professionals working in the talent retention and the diversity and inclusiveness teams, understand that valuable talent is often hidden by the communication issues that non-native English-speakers face.

In today’s war on for talent, hiring and retaining the best person to fill a particular role is the lifeline for many organizations - and retaining the talent becomes absolutely critical. The question is, “Is your talent being evaluated based on language prejudices?”

In today’s war on for talent, hiring and retaining the best person to fill a particular role is the lifeline for many organizations. The question is, “Is your talent being evaluated based on language prejudices?” #SmartTalkHR https://bit.ly/2w36UdN

We’ve found that there are three challenge areas that create barriers for people speaking outside of their native cultures, either in English to non-native speakers or using English as their second language to communicate.

#1 Confidence. Non-native English speakers often struggle with confidence. Perhaps robust and inspirational in their native language, many international professionals can lose self-assurance when working in English.  This works both ways - many native speakers understand the profound communication challenges when working in other countries.

#2 Inspiration. We found that inspiration becomes elusive for non-native leaders. You might be surprised to learn that it's not enough to just communicate effectively. In this day and age in leadership, executive presence plays a large role, and our leaders' abilities to inspire us is absolutely essential. We discovered that creating inspiration across a language can be one of the biggest challenges for business leaders.

#3 Responsibility. For people who are here in the United States, the onus of responsibility for communication generally falls on the non-native speaker who sometimes has to reduce an accent or increase vocabulary to gain more clarity.  However, the native speakers of English also must recognize the challenge of working in a second or third language.  It takes two to tango, and we often fail to make that connection.

Default to the native speaker

Often when people are being chosen for engagement at client sites, the native speaker is chosen over the non-native speaker. It begs the question: was talent the deciding factor or was it language?

Often when people are being chosen for engagement at client sites, the native speaker is chosen over the non-native speaker. It begs the question: was talent the deciding factor or was it language? #SmartTalkHR https://bit.ly/2w36UdN

This creates a challenging dynamic for the non-native speaker who might have the talent, and might speak English well, but is not being chosen for critical assignments. Organizations making these choices may lose valuable talent, as non-native speakers eventually leave as a result of continued slights and lack of opportunity. In today’s war for talent, it makes more sense to choose talent versus just language.

There is naturally a certain amount of bias created with accents—and it is not just about the native speaker. Think about the abundance of commercials using actors with British accents. We think of intelligence, education, sophistication.

Now, think about the commercial for the smartest and most interesting man alive made for a Mexican beer. The first actor that portrayed that was from the United States, the second actor who portrayed it now is from France. I'm curious as to why they're not using a Mexican accent. Why would they use a Spanish speaker? It's curious, because the perception of the Spanish speaker is radically different than the French and the British speaker. These examples demonstrate how we attach certain perceptions to accents.

In fact, perception is more powerful than facts. These perceptions are happening every day inside our organizations, happening so often that people are looking for solutions.

We’ve found that the conventional solutions don’t work. Instead of trying to “fix” people’s accents, it’s more important to look at the three pillars of effective communication:

#1 Speaking clearly gets the most attention in workplaces. This is where  people will focus in on accents. We don't actually focus in on accents because there are many people who have a very thick accent and they're very easy to understand while other people who have a minimal accent are impossible to understand. It’s less about accent and more about clarity of speech and speaking clearly.

#2 Speaking with impact most often gets neglected. The learning is not really so much about the speaker as it is about the audience and the kind of impact the speaker can have on them. Anybody who's fear of public speaking are generally focused on themselves more than on their audience.

Non-native speakers get very nervous when they focus on what they need to do and how they will communicate. Speaking with impact requires a mindset shift. Speakers who change their focus to answer the question, “What do they need from me?” are delivering messages with impact.

The problem begins with non-native speakers who have been told their whole career to slow down their speech, so people can understand them. But if you slow down your speech and enunciate each word, you lose your audience through sheer boredom. The traditional advice for non-native speakers is actually detrimental because it takes the impact away.

#3 Developing a compelling narrative begins with identifying a storyline that resonates with the audience. It helps move listeners to understand and to be inspired. Inspiring audiences is the most challenging piece and isn’t learned in a training program, it requires personalized, executive coaching.

Learning to inspire people through communications is not a skill reserved for non-native English speakers. In fact, there are complexities for native English speakers, especially when they are addressing a multicultural audience. A mindset shift is required for helping these people improve their communications and begins by letting go of our assumptions that just because they speak English, they can be understood.

Beyond fixing the language barrier

Commonly, business leaders are looking for a quick fix for their non-native speakers. They see their accents and ways of speaking as a problem to be solved. When we look at differences in speech as character flaws or things that people need to erase, we are showing our prejudice. In fact, people don't need to be fixed. They come from different cultures and from different languages -- those things aren’t fixable.

Traditionally non-native speakers are put through advanced conversation programs and accent reduction programs which are often not effective. It’s not a matter of aptitude, some of the most brilliant human beings on the planet earth who have worked with the best possible accent reduction instructors, have not seen success in these programs. There has to be other alternatives.

When people hear an accent, they automatically assume that people are not intelligent enough, are not ready for the prime time in the organization, and certainly are not ready to face clients who are native speakers. While these perceptions may not be conscious, this unconscious bias is a stereotype threat.

The ability to communicate effectively isn’t just about language. It can include cultural norms about assertiveness and developing an executive presence that comes from the confidence to speak with an accent.

When we start looking at the challenges for non-native speakers, we need to begin with the assumptions that get in the way of improving communications. We’ve identified three.

First of all, everyone has an accent. If you follow simple logic, an accent cannot be a problem. Clarity of speech and making sure that people are understood are the real issues. To our non-native speakers, the reality isn’t a consideration because if they can’t lose the accent, their opportunities at the organization are limited – it could be the difference between getting the promotion, or not. When our participants come in and say, ''I want to sound like a native speaker," we repsond with, "you shouldn't want to sound like a native speaker, you should sound like yourself."

Let's not confuse the language of business with the way we should be doing business. Attitudes that communicate that the English-speaking world is our world, and non-native speakers have entered our world at a disadvantage, do little to close the communication gap. If you’re interested in taking a deeper dive into the challenges of non-native speakers in a global economy, I share more stories and tips in the recent RiseSmart #SmartTalkHR webinar, “Retaining Talent: Developing Your International Professionals” and in my book, Leading in English, available on Amazon.