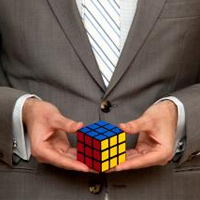 According to a report put together by the president’s team of scientific advisors, the U.S. will be facing a shortage of 1 million science, technology, engineering, and mathematics graduates over the next decade. That means companies like Accenture, whose consultancy business relies heavily on people with an ability to work with algorithms, are going to need to identify talent early.

That’s why the company is launching a mentorship program for first- and second-year undergraduate students in the science, engineering, and math fields. The program pairs students with senior executives to offer career guidance and a chance to network with Accenture managers.

Accenture is working with 35 universities around the world, and students accepted into the program will attend two workshops a year and collaborate on a project with others in the program.

Clearly, this is a win for the students. They get direction and the opportunity to build relationships when many of their peers are socializing. But this is also a win for Accenture: by establishing a relationship with talent before it even becomes available means that Accenture now has a pipeline of talent that it can use to feed its business.

For tech companies, especially Silicon Valley startups, it can be tough to attract great talent. Not only are these types of employees hard to find, these companies are battling the pull of giants like Google and Facebook. To compete, two firms took advantage of the natural curiosity of programmers and engineers.

SeatGeek, an event-ticket search engine, was fighting what it called a “signal-to-noise” problem regarding job applications. For every one job, they would receive hundreds of applications, many of which were from under-qualified applicants. To narrow down the serious and qualified applicants, SeatGeek created a challenge: to apply, job seekers had to hack into the backend of the company’s web site to submit their resume.

The company was looking for people curious and smart and reasoned that anyone who could solve its three-part puzzle was both. The challenge, started in 2010, was so successful that the company started requiring anyone applying for a programming position to hack into the site to submit a resume.

Another tech company, Quixey, also used a challenge to attract talented recruits. Engineers were asked to solve a fairly simple programming bug in less than 60 seconds. Those who were successful won $100 and were invited to interview.

While site hacking and mentorship programs may not be in line with your own company’s recruitment needs, you should still take away from these examples how you can use creativity to address your company’s specific hiring pain points. What kind of creative recruitment practices can you put into place today to start really targeting the kind of talent that you want working for you?