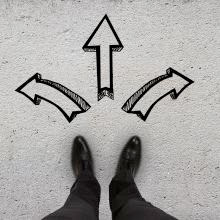 Gone are the days of employees getting hired on right out of school with one company, and then, 50 years later, retiring with the same company. Now, it’s almost expected that if someone wants to grow her career she will have to switch employers three or four times or more.

But does it have to be that way? Not according to much of the talk in the human resources space over the last week. However, a lot of the pressure to keep talented employees is going to fall on companies and the strength of their career development programs.

The Right of First Conversation: Over at the Harvard Business Review blog, Reid Hoffman, Ben Casnocha, and Chris Yeh argue that all of this job hopping may be happening because employees and employers don’t know how to have honest conversations about career goals.

The three say that, too often, employees wait until they have a new job in hand before talking about career development or career planning with their managers. Once the employee gets too far down the path of finding new employment, it becomes hard to maintain a positive relationship with the employer. At that point, the talented employee is going to quit, even if that person never really wanted to leave in the first place.

What we need is a policy that Hoffman, Casnocha, and Yeh call the “right of first conversation.” Here’s how they define it:

“If an employee decides she wants to explore other career options, she commits to talking with her current manager first, so that the company, if it so desires, has the opportunity to define a more appealing job or role.”

This policy would hopefully encourage more open communication about careers and job roles, including an employee-initiated conversation when the employee feels she’s in a role that no longer fits. It also provides a manager an open forum for offering career advice. And it gives the employer an opportunity to offer a new career path within the company that still aligns with the employee’s goals.

Developing skills a priority: Consulting firm BlessingWhite recently released some interesting research, which shows that the traditional career path is dead. Employees are no longer preoccupied with climbing to the next rung on their company’s corporate latter; instead, they are focusing on building skills—and that’s where things could get tricky for employers. It’s going to become increasingly imperative that companies become able to match the skills and abilities needed for their critical roles with the ambitions and skills of their current employees.

Once these skills are identified on both sides of the equation, companies can help employees with their career development. Companies can start by redefining the word “career” and getting away from the linear definition of career with which we are all familiar. Doing that opens the door to lateral moves and make it okay for people to look for development opportunities in places they would not expect.

The survey also suggests that, perhaps, the state of employee loyalty might not be as doom-and-gloom as we thought. Since the year 2000, employee tenure has gone up all over the world. In the UK, average tenure has gone from 8.2 years to 9.4. And the number in the U.S. is nearly 5 years, up from less than 4 in 2000.

So, if employees seem to be even a bit more willing to stay with an employer, what can your organization do to make sure they are happy with the direction their career is going?