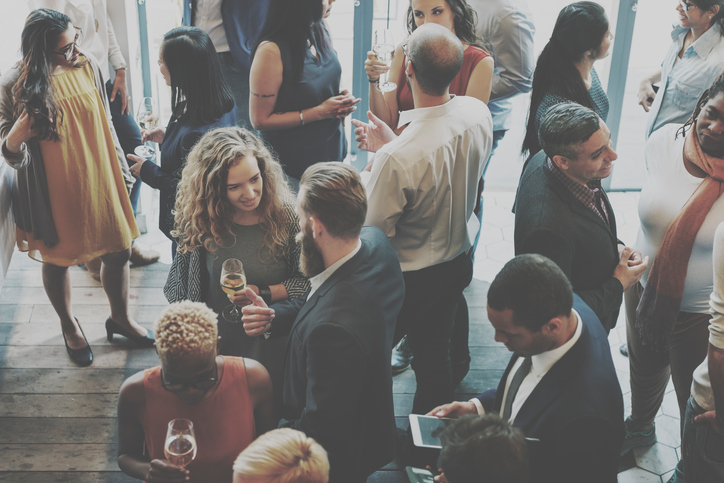 For some people the prospect of networking is akin to going to the dentist. The prospect of going to networking events or contacting “the right people” causes as much anxiety as scheduling a root canal. For those brave enough to reach out via email or through social media, the next step is bewildering. What will I say? How can I avoid feeling and sounding awkward? The answer is small talk.

While small talk is something that comes easily and naturally to some people, it’s not something that everyone can do without a little practice. When it comes to networking for a career transition, small talk can often be the key to starting conversations and setting the stage for successfully networking your way to a new job.

If you’d rather go to the dentist than network, here are a few tips to make the experience less painful. Who knows, you might actually start to enjoy yourself.

Before I launch into tips on how to make small talk work for you, I wanted to take a moment to reframe the concept of networking. Instead of thinking of it as something outside your sphere of normal social interaction, think of networking as an extension of what you’re already doing. Networking is just building relationships.

When you think about starting a conversation with industry peers or other people in your growing network, think about the types of things you might say to a casual acquaintance, or someone you haven’t seen in years. Be interested in the person you’re talking to and get to know them. There’s no magic formula to networking. It’s just making connections with people with whom you share some common knowledge and who work in your industry, or an industry you’re interested in joining.

Most people enjoy talking about what they are doing and things they are interested in. Engage your contacts by asking a few questions. Listen to their answers and ask follow-up questions to show you’re listening and genuinely interested in what they have to say.

Asking questions to start a conversation satisfies two goals. One, it takes the onus off of you to think of what to say, instead you can spend your time actively listening. Two, it immediately engages your contact to break the ice and get the conversation flowing.

After asking someone about how they landed on their career track, you might ask a follow-up question related to how they learned about the industry, a project they’ve worked on that they really enjoyed, or what they see as the next step in their career.

Initiating conversation is a terrifying concept to many people. When you’re at a networking event or industry conference and you see someone across the room, you know if would be beneficial to introduce yourself and get to know them. Making the first move to initiate conversation doesn’t have to be so terrifying. Start simple. Even if the conversation doesn’t go far, you will have made a connection that you can revisit at another time.

Believe it or not, just walking up to someone at a networking event and introducing yourself or asking to join them at their table can be effective conversation starters. The line at the buffet table is also a good place to strike up a conversation. Comment on the food and see if you can segue that into a longer conversation. If you can’t at that moment. Greet that person when you see them again and ask them how they enjoyed the event.

Now and then you’ll find that a conversation wanes. This is prime opportunity to change the subject and where the art of conversation comes into play. Before attending a networking event or industry conference, think about what types of questions might be relevant for people attending the event.

At a networking event, you can ask someone what their goals were for the event or who an ideal introduction is for them. You might find commonalities in why you are there or who you want to meet. This is a good time to share your career goals and to discuss the things that you like best about your work.

If you’re meeting with a contact, redirect to a topic you haven’t covered yet. This is a good time to start asking questions again to take the pressure off you making keeping the conversation going. Some good questions to ask in one-on-one meetings include:

Current events make for good conversation, but be sure to keep it light. For example, keep to topics such as the recent solar eclipse, summer vacation or holiday plans, new tech gadgets, and the weather -- you get the idea. When current events are particularly controversial, it’s hard to keep them out of conversations. If the other person brings something up, try to steer clear of sharing an opinion. Simply acknowledge the event and agree that it’s a controversial topic or distressing event and move on to other less heavy conversations.

Light current events can work well as opening lines in emails, as well. For example, you might begin, “Hi Jane, did you get to see the solar eclipse? It was truly spectacular!” Don’t attempt to talk about anything political or potentially sensitive in nature. Your goal is conversation, not soapboxing about a topic you are passionate about.

In the above examples, you might notice that none of the ideas make the conversation about you. That is purposeful. Creating connections means engaging others in conversation about topics of interest to them. Let them tell you about themselves and what they are passionate about.

However, you don’t want to leave the conversation without telling the other person something about you and leaving an impression with them about who you are. Be a part of the conversation by reflecting on a topic from your own perspective. Find places to agree with the person and relate your own experience that mirrors theirs. Feel free to talk a little about your career goals or perhaps something more personal. Just remember to keep your comments brief and relevant. Be eager to listen and learn. After all, gaining new knowledge is a large part of your networking goals.

At times, someone may approach you and ask a question. Avoid one word answers and try to create something to talk about. When someone asks you, “How are you today”, avoid replying with “Fine.” Give a little information to get the conversation going, such as, “I’m good. We are getting ready to move to into a new house. It’s only one town over, but it feels like it’s across the country with all the work involved.” Now you’ve given the other person something to respond to and you can follow up with questions about that person’s experiences. It’s really that simple.

Small talk can take practice. Try it out in other social situations, such as a party or casual social gathering. You might find you need to coach yourself a little to make sure you stay focused and energized during the conversation. Be aware of your energy level and your ability to make eye contact and stay interested.

And the biggest tip?

Smile! Let people know you appreciate their time and any suggestions they have for you in your career transition.

How do you use small talk in business and networking situations? Share your comments below, I’d love to hear about your experiences.