The Society for Human Resource Management (SHRM) is the largest HR association in the world. So as you would imagine, their events tend to make an impact on the industry.

In April, SHRM’s Talent Staffing conference brought hundreds of HR pros to San Diego for three days to discuss recruiting and retention issues. But their annual conference and expo, to be held at the Las Vegas Convention Center June 26-29, is an even bigger deal. 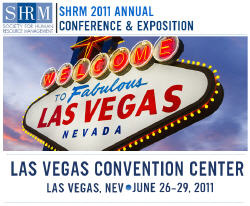 It’s interesting to note the focus of this year’s convention, which is the possibility for a huge shift in the economy between now and 2013, and its potential impact on the industry. As conference organizers put it:

The next two years will be the turning point for our profession and a vital time for the recovery of our nation. That’s why we have designed the 2011 Annual Conference to offer courses that go beyond anything we have done in the past. The event will feature the largest number of practitioners, strategic business management sessions and health care sessions ever. We know what the future holds for our profession, and we know that without a plan in place it could mean the difference between boom or bust for the nation.

The conference is in many ways HR’s “crossover” event — the names of the celebrity speakers have a mainstream appeal that extends far beyond the world of HR, or even business in general. And their expertise isn’t even necessarily HR — at least not in the ways you might expect. Inspirational and “bigger picture” speakers are included, and some of them provide a different perspective from the traditional HR conference presenter.

This year’s opening speaker, for instance, is Sir Richard Branson, founder and president of Virgin Group. The closing speaker is Michael J. Fox, the actor best known of late for his fight against Parkinson’s disease. He’ll speak not on management issues, but on his life and struggle with his disease, and about the power of positivity.

Also among the most interesting bookings is Arianna Huffington, who’ll speak about changes in the media landscape and how they affect HR. In a video post, Huffington talked about her address to the conference:

It’s really about how technology has changed the way we communicate and share information to our employees, to each other and to other businesses, and what the trend means for the future. As employers, why should we care about social media? Just as social media has transformed the relationship between companies and customers, it’s also changing the dynamic within companies. What was one-way is now two-way. And that can be a great thing…companies that open up channels within the organization to harness the true potential of all their employees will be best set up for the next century.

There are also many speakers of a more traditional HR bent. HR vet Ann Rhoades will present a session entitled “People-Centric Cultures Pay Big Dividends: Lessons From Great Companies,” which will touch on talent retention, workplace environment and customer-centric service, among other topics.

David Rock will discuss “From Human Resources to Neural Resources,” a look at what leading-edge research on how the human brain operates can mean for HR.

And Bruce Alan Johnson will tackle the issue of overseas expansion and why companies often send the wrong people to manage it in his session, “Carrying the Chicken: How to be Effecive Overseas.”

Registration for SHRM’s annual conference is still open and can be completed online.