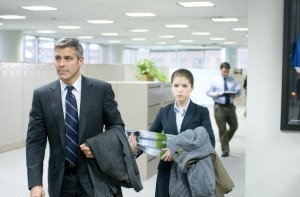 Our recent blog post about "Up in the Air" inspired Mackenzie Carpenter of the Pittsburgh Post-Gazette to call us for a story she was writing about the movie and its portrayal of corporate layoffs. Here are a few excerpts from Mackenzie's piece, which appeared in Sunday's paper:

Just how accurate a portrayal of your friendly corporate terminator is "Up in the Air" anyway? Not very, say those who actually do it for a living. "A lot of human resources people were excited when we found out that George Clooney was going to be playing one of us, and the movie is very good -- but it doesn't reflect HR consulting as I know it," said Sanjay Sathe, founder and CEO of RiseSmart, a Silicon Valley-based outplacement firm, which provides job-search help and career coaching to laid-off employees. "People who are laid off don't want a generic pep talk from someone they don't know. I can't imagine that tactic being as effective in real life as it's portrayed in the movie."... [T]he film's premise that people doing the firing are emotionally detached is not true, argued Mr. Sathe. "People go into human resources, as opposed to, say, finance or accounting, because they enjoy working with people, they genuinely like people and empathize with them ... my experience is that layoffs are usually very difficult emotionally on HR people." Still, as the economy limps along, will employees be seeing more strangers -- handsome or not -- come to bid them so long and have fun with that gourmet cooking gig? Despite recent growth in the outsourced human resources industry, most companies will continue to handle firings themselves -- with consultants brought in to help plan the layoffs or, like his company, to help them find new jobs, Mr. Sathe said. And there's one small detail in the film that cuts a little too close for comfort, he added. "I wish Clooney's character were not called a transition consultant in the film because we call our employees transition specialists." Just as Mr. Clooney delivers inspirational speeches to those he's just fired, "We also give pep talks -- not about building empires, but about how marketable they are based on a review of their backgrounds," Mr. Sathe said. "We might say, 'Hey, have you considered applying for a job in the health care sector? Because your experience is great and would transfer very well to that industry.' But I guess that kind of pep talk would not sell many movie tickets, would it?"

To follow up just a bit on the topic of empathy vs. detachment, I've recently read critiques of "Up in the Air" that argue that it's not so much Clooney's character, but the movie itself, that is detached and glib in dealing with corporate layoffs. As Salon's critic puts its:

What [director Jason] Reitman doesn't seem to get is that [the film's] real-world testimonies are only a half-twist away from the slickster line of goods -- "Losing your job is the best thing for you. Really!" -- that Ryan's character specializes in. When Ryan is spouting these prefab pearls of wisdom, they're treacherous falsehoods; when real people use them to make the best of a bad situation, they're enlightenment. Reitman can't even see the condescension in that. By putting these faces in front of us -- faces of people who have, most likely, suffered through some pretty rough times in real life -- he isn't making a grand statement about the precarious world we live in; he's turning the misfortunes of others into a gimmick, a convenient hook on which to hang his movie. That makes him less honorable than his smooth-talking, high-flying antihero. At least Ryan Bingham knows he's selling us a line of bull.

Personally, I liked the film. But I suppose you could argue that if Reitman really gave a hoot about the fate of those laid off, he would have attempted to make a film like Time Out, which explores the pain of an executive who loses his job (but can't bring himself to tell his family) in excruciating detail. At the very least, I'd put the empathy of HR folks up against that of Hollywood types any day of the week.