Could a city's economic prosperity, as measured by employment level, make a difference in its team's chances of winning the Super Bowl? Data from the Bureau of Labor Statistics suggests that it does. According to a new analysis by RiseSmart, the team whose metropolitan area boasts the lower jobless rate has won 16 of the past 20 Super Bowls – an 80 percent success rate. 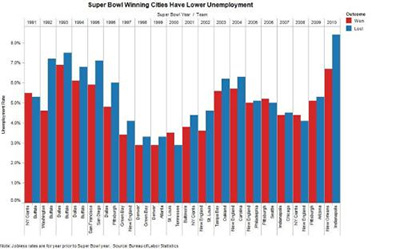 On January 27, 1991, the New York Giants beat the Buffalo Bills in Super Bowl XXV, despite the New York City metro area having a higher 1990 jobless rate than Buffalo. After that game, however, the Super Bowl winning city had lower unemployment in 16 of the next 19 contests, including Super Bowl XLIV, in which New Orleans (6.7 percent 2009 unemployment) defeated Indianapolis (8.4 percent).

Other facts of note:

"Unemployment is the No. 1 issue in America today, and that will be true on Super Bowl Sunday as well," said Sanjay Sathe, CEO of RiseSmart, a provider of next-generation outplacement and recruitment solutions.

"In weighing the meaning of this analysis, correlation doesn't imply causation, of course. But you could argue that a fan base with lower unemployment is more likely to attend games, buy team gear, celebrate at sports bars and, ultimately, cheer their team on to victory. By contrast, a metro area that is struggling with high unemployment might have a subtle but insidious effect on its team's morale," Sathe said.

Concluded Sathe: "Never underestimate the power of having a job."

Note: Jobless rates are for year prior to Super Bowl year. Source: Bureau of Labor Statistics.

RiseSmart is the leading provider of next-generation outplacement solutions. The company leverages a cloud-based technology platform, proven methodologies and one-on-one support to help employers with their workforce strategy, and displaced employees with their career strategy. RiseSmart drives significant ROI to organizations by offering affordable pricing while reducing unemployment insurance taxes and severance costs. RiseSmart has received a wide range of awards and recognition from organizations including Bersin by Deloitte, the Best in Biz, Gartner Inc., the Golden Bridge Awards, LAROCQUE, the Momentum Index, Red Herring, the San Francisco Business Times, SiliconIndia, the Silicon Valley/San Jose Business Journal, the Stevie Awards and TIE.